Good afternoon from Classic Swing Golf School!  If we can get through the current cold front, Spring weather arrives soon.  The staff at Classic Swing doesn’t let the weather slow them, their classes have been full this season!  Contact them today to schedule your school.

Meanwhile on the tour… 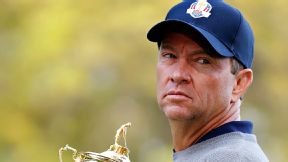 Jamie Squire/Getty ImagesJay Haas thinks having Davis Love III, above, assist him at the Presidents Cup only will help the Ryder Cup captain going forward.

“We’ve talked about this for quite a while, before he was on the [Ryder Cup] task force or named the Ryder Cup captain for 2016,” Haas said at a news conference Wednesday at Trump National Doral, site of this week’s WGC-Cadillac Championship. “I asked him if he still wants to do it, there’s a lot on his plate. So I could understand if he didn’t want to do it. But he loves the team concept, he was excited about it when I asked him to do it, if he didn’t play, didn’t qualify… this is not something I sprung on him in the last few weeks.

“I gave him an opportunity to say, ‘Enough is enough, I need to step aside for a while.’ But I think this can only help going forward.”

Love, 50, plans to play a full schedule this year on the PGA Tour, which will allow him to play with and compete against possible U.S. team members — one of whom could be Haas’ son, Bill, who won the Humana Challenge in January.

International captain Nick Price, who was the losing captain in 2013 at Muirfield Village in Ohio, named countrymen Mark McNulty and Tony Johnstone as his assistants on Wednesday.

The Presidents Cup will be held Oct. 8-11 at the Jack Nicklaus Golf Club in Incheon City, South Korea. By Bob Harig | ESPN.com

At the Classic Swing Golf School, we pride ourselves on ensuring customer satisfaction. Our entire staff is dedicated to helping each student achieve his/her golf goals while exceeding their expectations. Conveniently located in Myrtle Beach, at Legends Resort, we strive to provide the highest quality instruction along with the most fun and relaxing environment available.